Posterior correction and fixation involves placing the surgical wound at the mid-back [Figure. 8-1], exposing a posterior elements of the spine, inserting screws or hooks into them, connecting them to a rod, and then applying a rotation or torsional manipulation of the rod to straighten the spine as much as possible, while at the same time reducing torsion as much as possible [Figure. 8-2].
In general, the range of the spine to be fixed is longer than with anterior correction and fixation. Both corrective and immobilization forces are strong. 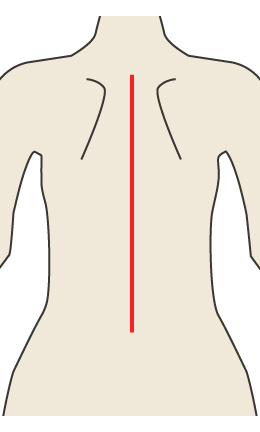 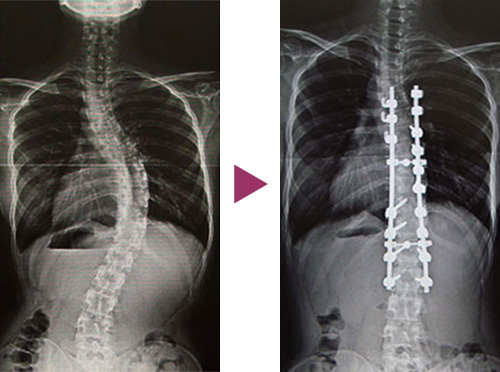 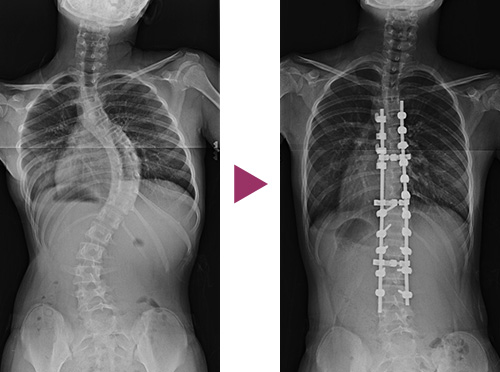 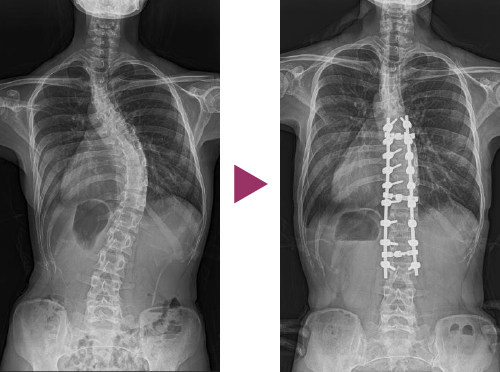 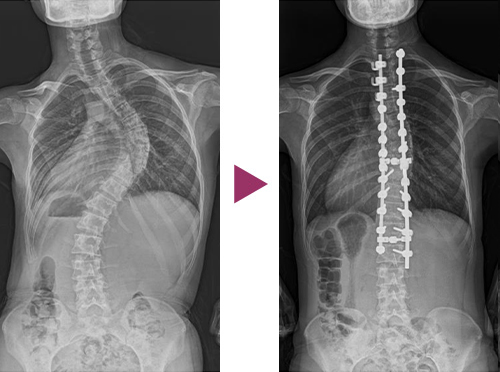 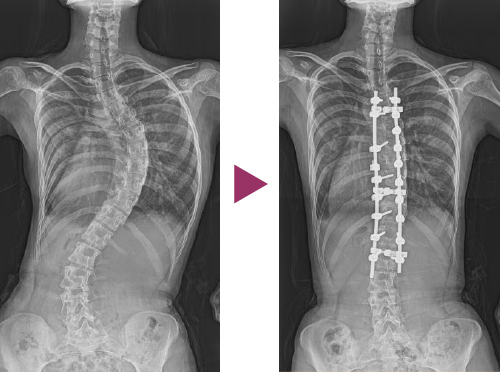 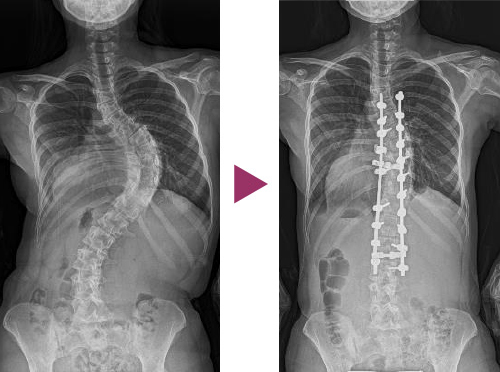 Anterior correction and fixation exposes the vertebrae, the anterior element of the spine, by opening the chest or retroperitoneum and exposing the vertebrae. A screw is then inserted into each vertebra and connected to the rod, and a compressive or torsional manipulation of the spine is applied to the spine. The idea is to keep the spine as straight as possible and at the same time eliminate twisting as much as possible.
In general, the range of fixation is shorter than with posterior correction and fixation. The ability to correct spinal deformities is strong.

As mentioned above, anterior correction and fixation provides great corrective ability with a short range of fixation.
However, for the curve of the thoracic vertebrae, it has traditionally required a long oblique incision from the peri-scapular to the inferior anterior breast [Figure 9-1]. Even if a spinal deformity can be corrected, patients are not happy about the large surgical scars that are left behind. 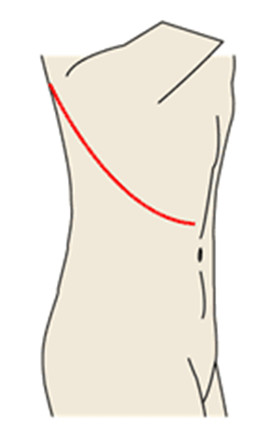 Developing a surgical system through a small incision

Dr. Ebara, a surgeon at our center, wondered whether it would be possible to perform anterior correction and fixation of spinal deformity through small incisions, and he has been researching and developing new surgical system to make this possible since 1994. In 1995, he began developing a new surgical system in collaboration with a Japanese medical equipment manufacturer. He started in clinical practice since 1999. 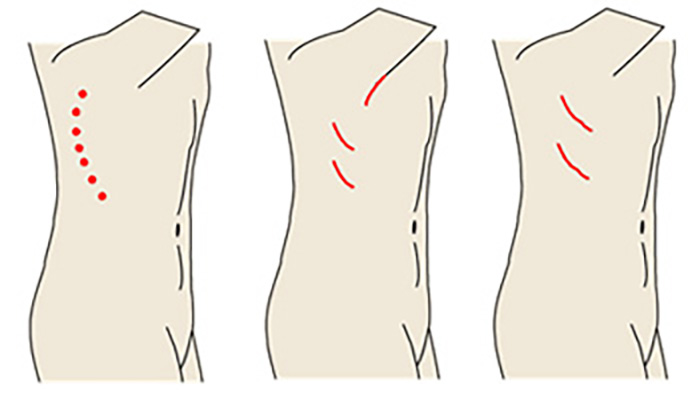 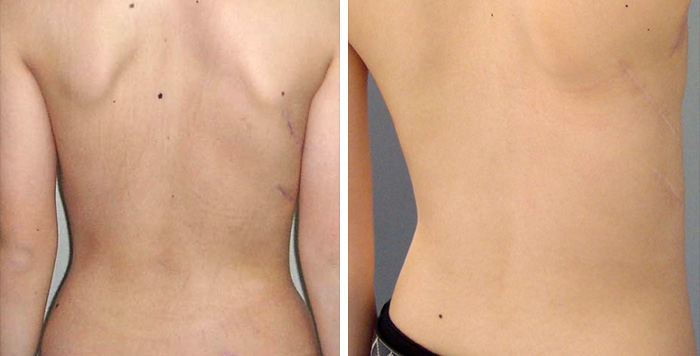 Dr. Ebara has performed more than 100 cases of anterior correction and fixation surgery in the past. This procedure allows for a high rate of correction. Because the surgical wound is hidden in the armpit, the scar is not noticeable, so it can be very useful to treat idiopathic scoliosis, which is common in young women. This is a big advantage for young women patients [Figure 9-4]. However, this surgical procedure is not adequate for severe or stiff curves or long curves. 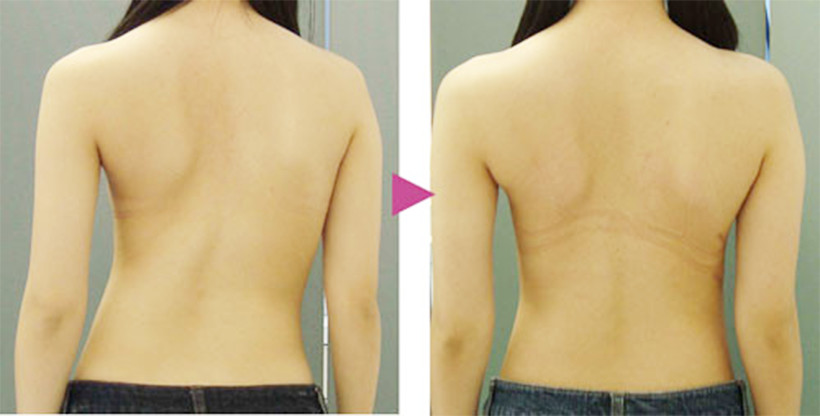 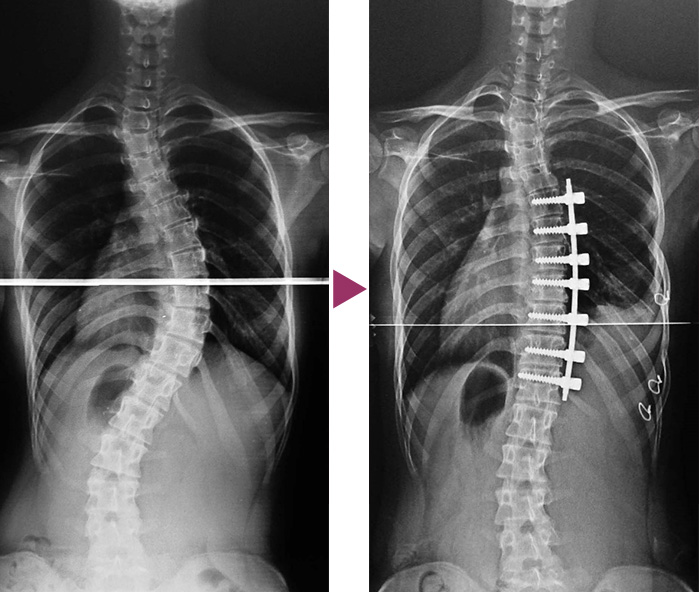 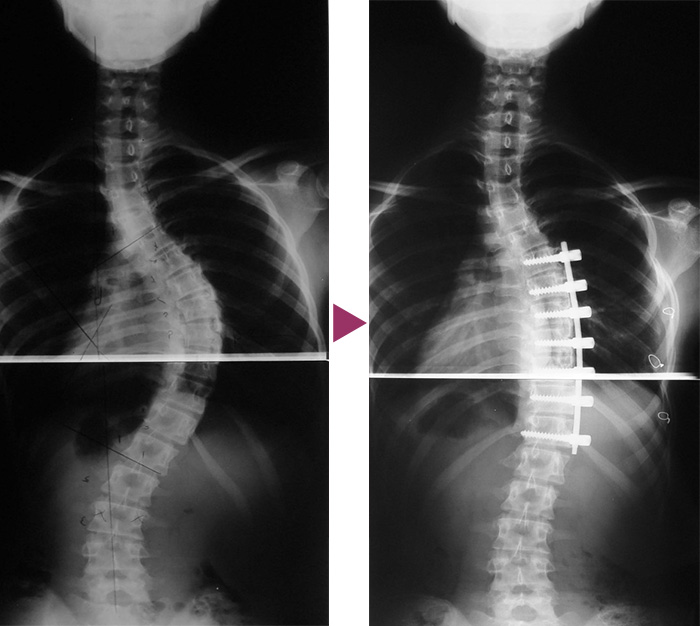 For the thoracolumbar curve, Dr. Ebara has developed a procedure making as short an incision as possible longitudinally over the axillary line of the trunk (on the extension of the armpit) or in two 7-cm wounds, rather than through a large oblique incision in the thoracic and abdominal wall similar to the traditional thoracolumbar curve [Figure 10-1].

In this case, as with the thoracic curve surgery as written above vertebrae, the surgical scar is not visible from the front or back of the body. This method also has a high correction rate (Fig. 10-2). However, severe rigid or long curves are not candidates for this procedure.

The thoracolumbar curve causes the pelvis to tilt, causing the waistline of a belt or skirt to tilt or the hem of a skirt to tilt, but after surgery, the spine is straightened and the pelvic tilt disappears [Figure 10-3]. 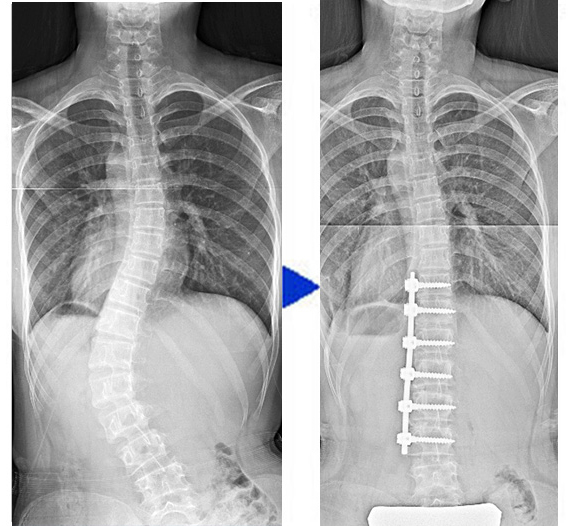 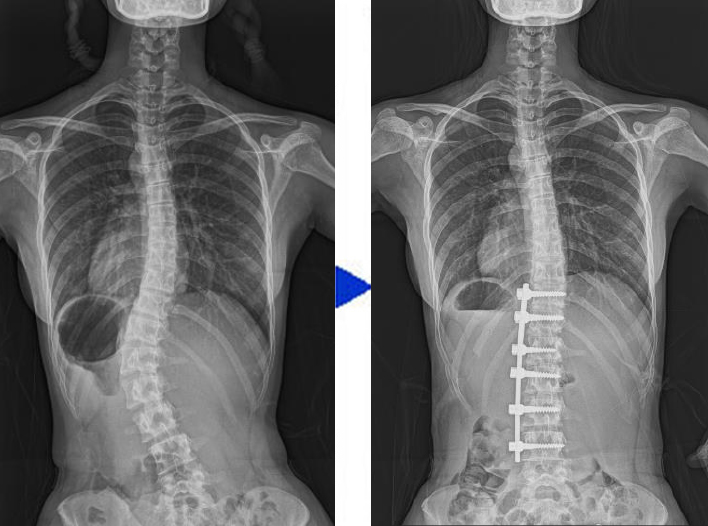 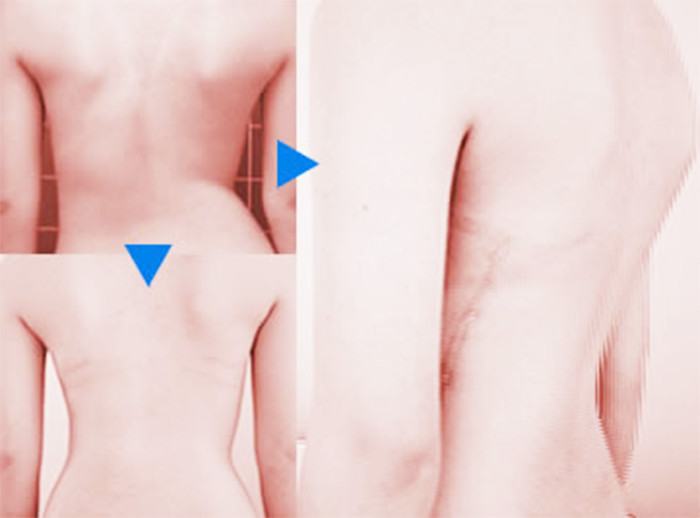 Scoliosis in people in their 40s, 50s, 60s, 70s, and 80s has been increasing rapidly in recent years , and scoliosis surgery for them is becoming more and more common. It is safe to say that scoliosis from a young age, left untreated, can be considered to refer to a scoliosis that has worsened with age.

Compared to young patients, scoliosis surgery for elderly scoliosis patients is more difficult to perform than scoliosis surgery in young patients due to the loss of body balance to the left and right, the frequent complications of retrograde scoliosis (rounding of the back) and scoliosis, and the weakness of the bones. Also, considering your age, you may think about whether to have surgery or not.
However, if the surgery goes as planned, breathing difficulties due to chest compressions and loss of appetite due to stomach compressions will improve. The back is straightened and balance is restored, which makes daily life much easier [Figure 11].

In addition, injectable medications that promote bone formation and inhibit bone resorption have recently been made available for the powerful treatment of osteoporosis. This makes it possible to perform surgery while treating osteoporosis. The oldest patient in our center for scoliosis surgery is 86 years old. 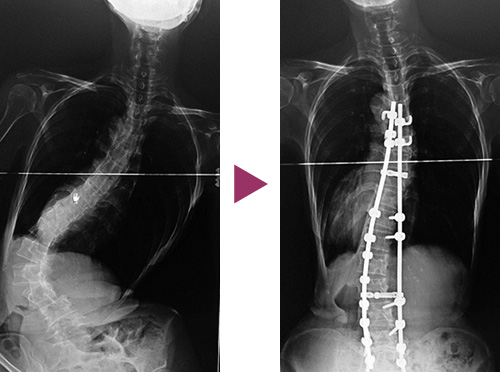 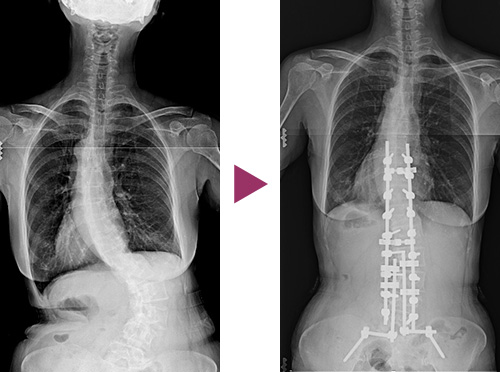 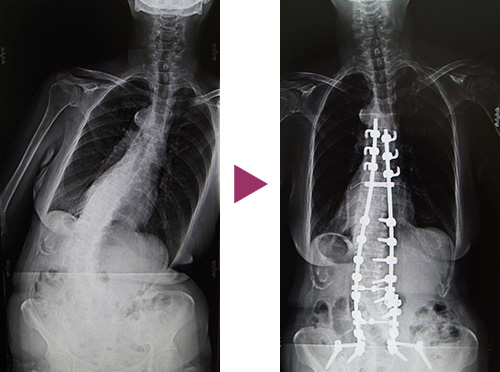 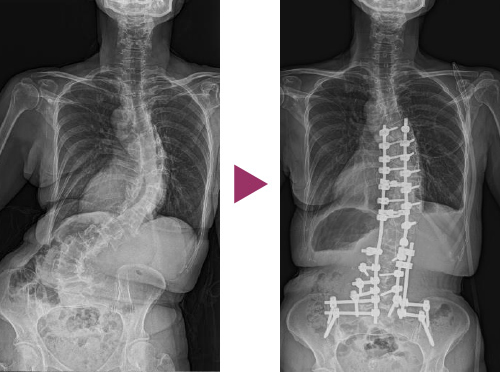 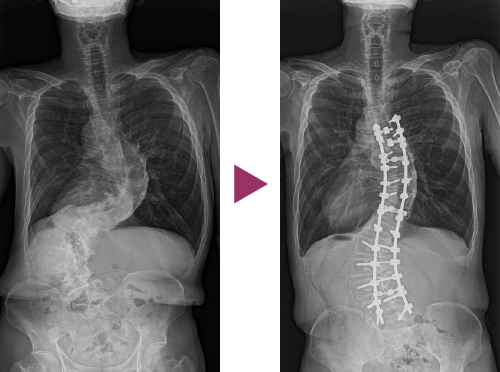 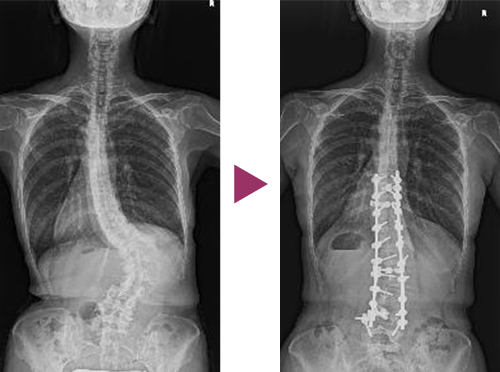 Kyphosis with or without spinal compression fractures has been on the rise in recent years. The main symptoms are dyspnea due to pressure on the chest from kyphosis, anorexia due to pressure on the abdomen, and upper/lower back pain. Scoliosis can be corrected with correction and fixation surgery to make breathing and eating easier. Lower back pain can also be reduced. However, it is often associated with bone fragility and may require adequate bone strengthening prior to surgery. 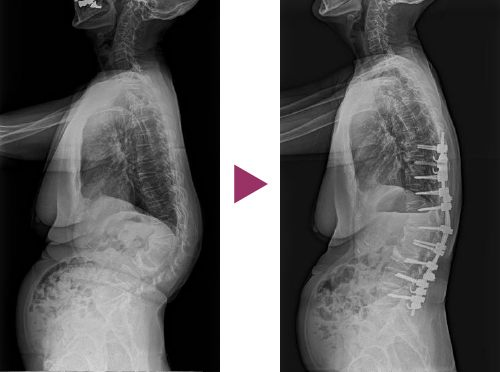 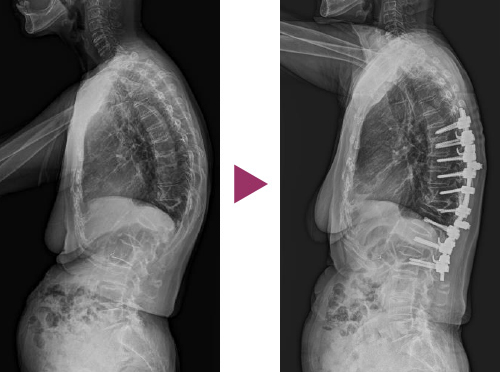 Our center uses a traction system for scoliosis surgery (CORRECTION BOX), which has been developed uniquely by Dr. Ebara.

In the operating room, both lower limbs are tractioned just before surgery on the operating table to correct the spinal deformity as much as possible before the surgery begins. For this reason, a significant amount of correction is already acquired before starting the surgical incision. 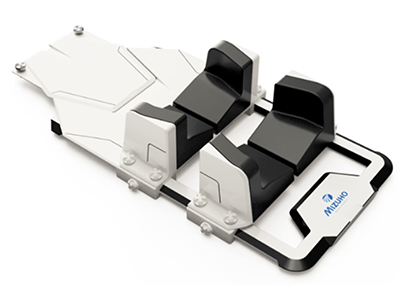 The center uses a correction box to balance before the start of the scoliosis surgery, and furthermore, the upper and lower limbs are tractioned to correct the curve of scoliosis as much as possible. After that, the surgery will be started.
In posterior correction and fixation, pedicle screws are inserted first. Then, open outriggers are used to add correction, or short rods are used to slightly correction. After that, long rods are inserted and double-rods rotation or single rotation is performed for further correction. After that double-rod rotation is performed for further correction. Where pedicle screws cannot be inserted, compression hooks can be used to firmly grasp the bone.

In the rare case of adult scoliosis, the corrected spine may tilt, so a short rod set perpendicularly from the pelvis may be connected to bring it into perfect balance.

In addition, right angle hooks can be fixed rods to increase strength of fixation. A variety of corrective options are used in the surgery, and this video shows an example of one of them in an anatomical model.